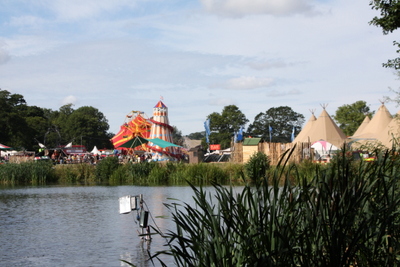 This year we attended our first big festival with the kids – Shambala.

Shambala takes place in Northamptonshire (the exact location is a secret, though I can’t imagine its a very well kept secret with nearly 20,000 people there!).  However, it was originally based just outside Bristol and I loved the fact that I kept meeting people, going to food outlets and seeing acts that were from the Bath/Bristol area – it was like a home away from home!  It is also a good indicator of the success of Shambala that citizens from the South West have followed this festival across the country.

I am a bit wary of festivals that seem aimed purely at indulging the kids. Shambala on the other hand has managed to create a family friendly festival that is also a fun and stimulating festival for adults. There were plenty of partying child-free people and tons of cultural entertainment from poetry to film making to acrobatic performances and of course music.

My kids are now 7 and 10 and only found limited fun in the children’s field but don’t fear they weren’t bored because of my favourite bit of the whole festival – The Woodland Tribe. It was awesome!

The Woodland Tribe held various activities in a woodland behind one of the camping areas.

In the woodland children paid a deposit (£1) for a hammer and grabbed some nails, found a piece of wood and got hammering (other tools were also available).  Very basic structures had been erected among the trees to give children a starting point but beyond that it was up to them.

There was also high nets for clambering around on, rope swings, rope balancing bridges, a big zip wire and some adult led forest school activities using tools. Plus woodland for the kids to play in, my youngest went off with a friend and made a camp.

Ah, it was my idea of heaven! 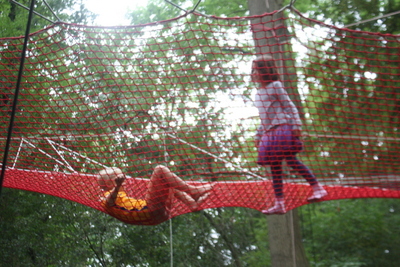 The Enchanted Woodland was also very cool with art installations, music and lots of places to chill and enjoy the magical space – even better when it was dark, it all felt wonderfully magical. However, avoid the stampede when it opens on Friday evening – not magical at all!

A corner of the Enchanted Woodland

We managed to do lots while we were there and yet I still missed so much. This is one of the contradictions with festivals so much to do and see, yet also the desire to just kick back and do nothing but people watch and enjoy the atmosphere.

Which brings me to another defining feature of Shambala. Fancy dress.  I know most festivals have fancy dress themes these days (I don’t remember it when I was younger) but the Shambalans really go of it. There was almost nobody who wasn’t decked out.

Friday night was drag night. Many, many men wearing many different levels of dress.  Including my friend’s son (age 8) who bravely wore one of his sisters dresses!  And Saturday was the Cosmic Chaos parade.  We saw some amazing costumes, people really make an effort!  So if you are planning to go I would strongly suggest face paints and some crazy clothes at the very least.

Me and my pom pom monster

And finally – ear plugs saved my sanity.  I slept like a baby despite thumping baseline and, unlike my younger days at festivals, came home having had 4 good nights of sleep! Recommend.