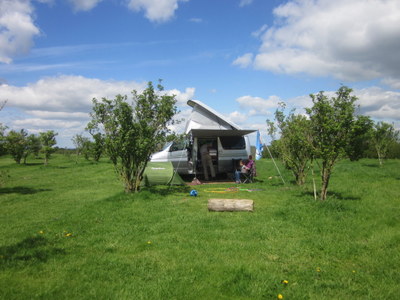 It sort of crept up on us slowly.  Camping – love it.  Packing and unpacking the endless paraphenalia – not so keen.  And then I met a friend who had a campervan. She talked about how quickly they could go from making the decision to camp to pulling off the driveway on their way for a weekend. Now that sounds ideal. I mentioned it to the husband but he was a bit taken aback. It wasn’t something we’d ever considered before.  It wasn’t a long held dream.  I always thought campervans were a wee bit whimsical.  The practical application hadn’t really occured to me.  Daft.  Plus the cost seemed prohibitive.  Have you seen the price of a VW?  A new VW can set you back – well a lot. A lot more than we have, more than I would ever contemplate spending on a vehicle. And a second hand one? Well either you are going to need 20k or not be worried about very high mileage.  So anyway, for all these reasons the idea was summarily shelved.

But then, the husband came home one evening all excited about a conversation he’d had with a friend who had a Mazda Bongo campervan.  ‘A what?’  I think was my response.

The Bongo was made solely for the Japanese market. It is basically a people mover with 8 seats.  However, the cunning twist is that the Auto FreeTop model has a factory built pop up roof, designed for two people to sleep in. And all the seats lie down completely flat to make a bed ‘downstairs’ too.  What an interesting concept,  who knew camping was popular in Japan?  The original advert is brilliant 80’s cheesiness.  You can keep the original configuration, the footprint of the Bongo is suprisingly compact so its perfectly possible to use it as your everyday vehicle. Or you can have it converted into a full on camper, there are loads of different options.  The best thing about it?  Its much cheaper than a VW.  And so the search was on to find our own Bongo.

The Search: They are no longer being made so all Bongo’s for sale are second hand.  They have also all be imported at some point from Japan either by an individual or by a dealer.  Mazda never sold them in the UK.  This is important to know because there is one problem that Bongo’s suffer with.  Rust.  But there is a way round it.  The Japanese do not use salt in their roads, of course, their climate is very different to ours.  As a result cars for the Japanese market do not have the same undersealing and protection that vehicles soled in Europe have.  As a result a perfectly sound Bongo can arrive on British soil but within a few years have some seriuos rust issues.  The solution? Have it undersealed and Waxoyled (potects the cavities). No i’d never heard of either thing before, but there are plenty of garages around that will do it.  It should cost a couple of hundred pounds and is well worth the investment!  We looked at quite a few which had been in the UK for while but hadn’t been properly treated.  Look great on the surface but underneath.  Not so good.

After maybe the 4th disappointing long distance drive the husband undertook, only to find rust, we realised that we would have to go directly to the source and import one ourselves.  There are quite a few companies you can buy fresh imports from and quite a few who will send you details of a van in an auction, carry out a very thorough inspection and send you a report and then bid on your behalf.  The second option works out cheaper, though of course you do have to wait much longer for your Bongo as it thenhas to get shipped to the UK.

It was all quite frustrating at the time.  The right specifications weren’t coming up, we had to compromise on not having a 4wd, and getting a V6 instead of a diesel, and had to accept we weren’t going to get the colour we hoped for.  We lost out in two auctions on vehicles we wanted.  To be honest I was losing hope.  Then suddenly it happened.  We bid succesfully and a shiny, silver Bongo was sent off on a long, long journey across the oceans from Japan to the UK.  The company who bought it for us sent us a link to the container ship it was on and we could watch its progress on a map online.  Oh the miracle of modern technology!  There was a panicky moment when the ship disappeared from the map near Somalia, pirate infested seas!  A witty friend sent us a photo of a Somali pirate, with AK47 slung over his soldier saying ‘This man is driving your Bongo’.  Ha ha. Not.  It turned out the signal was turned off in that area in order to  hide from the pirates. Phew.

Finally, the ship arrived in port and we could collect it from the dealer.  However, the long journey to campervan ownership was not yet over.  The Bongo was still a people carrier.  Next the conversion.  The husband had to get a train to Coventry to collect it and then drive it all the way to Bideford for the conversion! Look here for more about buying a Bongo. 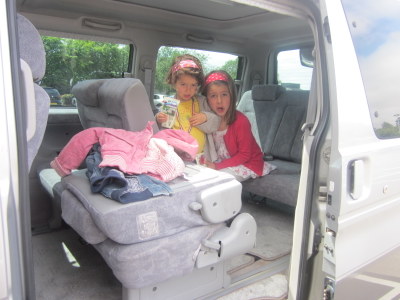 This is what it looked like inside before the conversion!

As you may expect there are lots of different conversions you can do to a Bongo.  Some people have a full side conversion which includes sink, fridge, hob and storage cupboards. You then add a ‘rock and roll’ bed, which is a seat which rolls out to form a bed.  Astonishingly these types of seat are not crash tested and do not have head rests.  Maybe we are a bit paranoid but I didn’t fancy puttig the kids in this to travel long distances!  We opted instead to retain the original back seat, remove the middle seats and have a bench added to make a family space. This is called a mid conversion, we still have a fridge, sink and hob, but less cupboard space. Find out more here. 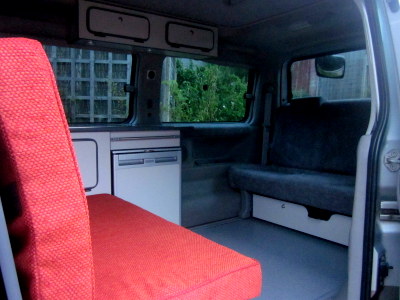 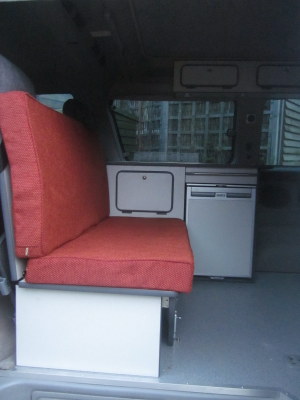 The bench seat and sink, fridge and hob unit.

We also had a very useful roof converion.  The original design includes a hatch in the middle of the roof for access up to the roof space.  Not much good for easy access to squealing small children in the middle of the night.  The conversion is quite hard to explain but basically you are left with a hatch at one end which we leave open so we can easily reach up to them. For a full size person (umm adult I think that’s called) you put down the hatch to make the bed full length. 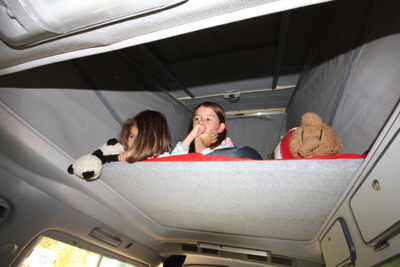 The roof conversion. Looks a bit odd in this picture but they are snug as bugs. My eldest says she sleeps better here than in her own bed!

The inside is a bit on the grey side so we (actually the husband, I don’t know a bobbin from a treadle) have been making cushions to brighten it up.  And we have just had the back seat re-upholstered to get rid of the car seat contours.  Much comfier as a bed! 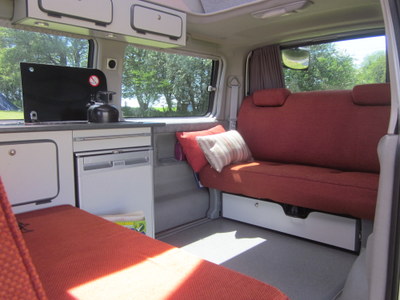 As you may imagine, there are lots of tempting things we can do to make the Bongo funkier.  I have been eyeing up these gorgeous crocheted lambswool blankets from Rocket and Bear, and I would love some kind of bunting or flags.  Haven’t seen the right thing yet though. But looking is all part of the fun!

Campervans are great.  VW’s are great. Bongo’s are great. It is June we’ve had a rubbish summer so far but we’ve already had 4 trips out in the Bongo, each time taking advantage at short notice of a window of better weather.  This is what its all about!

‘Things you should know about Bongos‘,

‘What are the conversion options?

59 thoughts on “My brilliant Bongo.”